J.J. Campbell is the best friend of Luke and works together with him at the ports.

J.J. is a caucasian teenager, with short dark hair. As Luke during his time at N.Y., he is very slim and short, and wears humble clothes.

J.J. is a childish, somewhat naive young boy who complains almost always, especially about his job and boss. He looks to be fascinated by gangs, even considering to join one of them, so he can get a name and a more comfortable life. Neverthless, he is very friendly towards Luke, and respects his point of view. He ahas a good relationship with Brad as well.

Maybe due to his young age, J.J. is fixated with sex, asking to Luke if Emms is Luke's girlfriend and trying to visit salons, in order to lose virginity.

J.J. is first seen with Luke, passing by Five Points intersection, where he sees the dead body of a Grave Digger member, who was killed last night by Brad. J.J. comments that he want to escape this crappy life and getting rich by joining a gang and making a name, thinking that this was the American dream. He was convinced otherwise by Luke, who explained that the gangs and the corrupt politicians are at fault for the current state of the city.

J.J. is again seen with Luke working hard at the ports and again complaining how hard this job is and how they are treated badly since they are immigrants. He wants to quit this job, but is surprised how Luke doesn't complain at all.

Few days later, after work, J.J. invited Luke to come with him to a fun place. He brought him to a saloon, stating today, they will become men. Luke didn't like the idea, and wanted to go home. In that moment Raymond Fitzgerald showed up, and complimented them for choosing his saloon and invited them in, to give them good girls. Where J.J. lost his virginity to one of the girls.

J.J. was seen in Luke and Brad's place, boosting that he is no longer boy, but a man. Together with Brad, they laughed at Luke's failure and desire to do it with the girls he likes after getting married. J.J. invites Brad, to come with them next time, and that he knows a man, that will show them good places. Luke ask him, to not do it, because that man, has evil look in his eyes, but J.J. finds him as a nice guy. Brad refuses to come with them, because he don't need to pay the women, to come to him.

On the next when he and Luke was going to work, Raymond appear before them asking them to come with him. When Luke refuses to go with Raymond due to his “nasty look”, Raymond proceeds to shoot J.J. point blank at his temple. His body was later found by Brad and Emma in the streets. 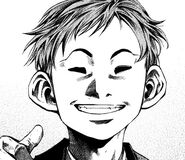 Raymond killing J.J.
Add a photo to this gallery