Start a Wiki
Grave Diggers are an Irish gang located in The Five Points, founded by Gene McDowell and Edward King at least 15 years ago. Their headquarters is Gene McDowell's Bar. Long ago they where the strongest ones and where controlling the whole Five Points. But since then they started to lose little by little of their control, since more and more gangs where showing up. Right now they control small part of the Five Points, only the sixth borough. Kip McDowell, son of Gene McDowell is supposed to take over the organization someday.

They show no mercy even to their own members, having killed one of theirs for selling them to another gangs. A corrupt cop, who was in charge of their territory and covering them, tried to use them for his own and wanted they to kill another policeman, but instead he ended up the dead one.

Currently Brad Burns is working for them as a hitman for them and is known as Grim Reaper. He was picked up when was young by Gene. His father Edward King, seems to have some relations to the Grave Diggers too, since at young age is seen with Gene and have a GD tattoo too.

All the members have a tattoo with initials "GD" (standing for Grave Digger) somewhere on their bodies, which is distinguishable mark for the people to know with who are their messing with.

Orchestrated by Kip, both gangs ended in a big all out war. Kip wanted Raymond, 2nd in command of Iron Butterflies, to kill Brad and told him how to call him alone, and in the fight it was believed that both Raymond and Brad died. After that Kip started all-out war with the Iron Butterflies, but Brad returned, killing members of both gangs. Eventually Kip took out a gatling gun, he purchased from Edward King and killed all except Brad. Gene interfered and knocked Kip out and after some talking with Brad and Luke, he left and ended the war. The war ended in October 10, 1866, with 116 dead Grave Diggers and 87 dead Iron Butterflies. The same day marked the complete destruction of the Grave Diggers.

Sixth borough, the current territory of the Grave Diggers 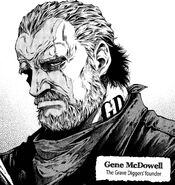 Gene McDowell, the founder of GDs 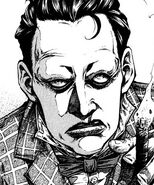 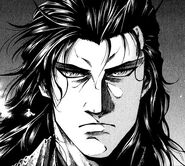 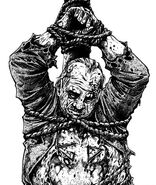 The dead GD member who sold them out

Unnamed GD member, who was killed by the Iron Butterflies 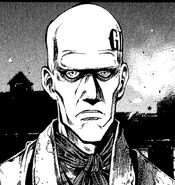 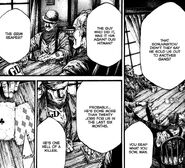 Other GD members, playing cards in the bar
Add a photo to this gallery
Retrieved from "https://greenblood.fandom.com/wiki/Grave_Diggers?oldid=5345"
Community content is available under CC-BY-SA unless otherwise noted.